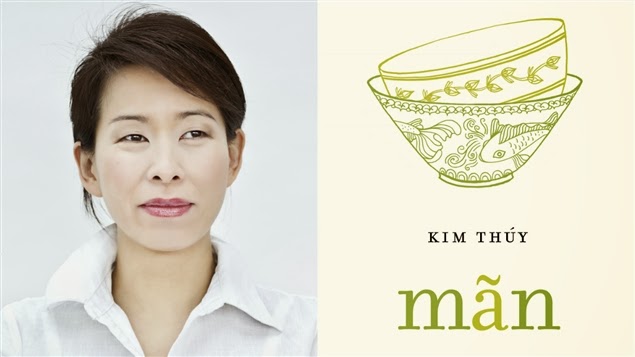 Kim Thúy’s newest novel, Mãn, clearly surpasses her earlier work. And that is no mean feat as her first novel, Ru, garnered this Montreal author the Governor General’s Award for French Fiction. Thúy’s writing has considerably evolved since Ru. Unlike her debut novel, which enchanted readers with exotic vignettes of Vietnam and entertaining anecdotes about integration into Canadian life, Mãn delivers at a higher level.

The protagonist Mãn is a young woman from Saigon who agrees to a marriage, arranged by her ailing mother, to a Việt Kiều, an overseas Vietnamese. Transplanted to faraway Montreal, Mãn devotes herself to fulfilling the desires of her husband and the customers in his small restaurant for the culinary delicacies of their home towns and villages. Her fame as a cook soon draws hordes of lonely men who live through her dishes memories of a country they fled decades before.

When Julie, a French-Canadian aficionado of Mãn’s cooking, proposes to expand the restaurant and collaborate on a recipe book, Mãn’s world expands to include talk shows and international books fairs. In Paris for the city’s Salon du Livre, Mãn meets Francine, an editor who grew up in Saigon and loves all things Vietnamese. Francine introduces Mãn to her brother, Luc, a celebrated Parisian chef who shares Mãn’s passion for food and Francine's longing for Vietnam. Mãn soon finds herself gliding from her world of duty into Luc's embrace.

Kim Thúy’s novel is more than a love story, and certainly breaks with the Western paradigm of romance. The torn hearts, heightened emotions and conflicted morality—the hallmarks of European literature since Thomas of Britain wrote Tristan and Iseult—are happily absent from Thúy’s work. Instead, at the speed of dew drops off lotus petals, her quill transforms her heroine from a Confucian child bride into a fully blossomed woman.

Reading Mãn in the French original text is sheer pleasure. Thúy’s rich vocabulary rings with the musicality of a finely attuned ear. The novel will soon be available in English translation, but the translator’s task will assuredly be a daunting one. Whatever the language, in which readers choose to read Mãn, they will delight in this skillful intersection of tradition and passion, of duty and the frailty of the human heart.