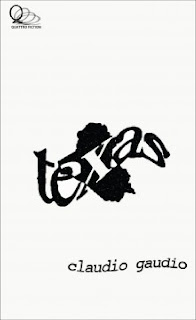 Claudio Gaudio’s highly experimental style in his novel Texas is poetry trespassing on the contours of prose.

Texas is neither an easy read nor a page-turner. The rapid-fire cadence of the narrative is best savoured in small doses—one page here, another there. For every four lines of text is a poem, and Gaudio’s mastery of allegory and epigrams invites the reader to journey through a devastating criticism of power politics and post-colonialism.

The plot, or rather the shadow of a plot, ostensibly has as its protagonist a diplomat, whose primary function appears to be to wheel cartloads of dollars through various third world countries, subverting their regimes and imposing more acquiescent governments in their place. The name Texas is a thinly veiled euphemism for the US.

The diplomat, having run his course of luck on several continents and leaving behind chaos and misery, is suddenly kidnapped in an unnamed Middle Eastern country, with a striking resemblance to Iraq, although perhaps seasoned with a little of Afghanistan. The diplomat, imprisoned in a barren room in a non-descript suburb, awaits his impending execution. His warder Hakim, his only human contact, is an infrequent visitor.

As the diplomat loses all hope that his political masters will ransom him, he confides to the only other living creatures in his surroundings—a bird and a mouse—his inner thoughts about his long career in financing revolutions and coup d’états, quelling rebellious nations and “state-building.”

Poetry as political criticism is not new, but Claudio’s exceptional talent in weaving it into a thoroughly enjoyable full-length novel is, at least for the Canadian literary scene.

Texas is Gaudio's first novel and is published by Toronto's Quattro Books.