The Ordinary Adept by Phyllis Straub reviewed by Con Cú 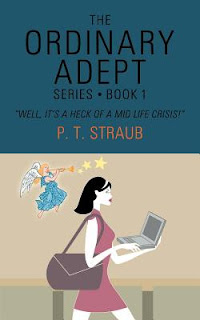 The Ordinary Adept by Phyllis Straub
reviewed by Con Cú
The Ordinary Adept by first-time novelist, Phyllis Straub, is truly a remarkable journey into cosmic mystery solving. The story’s heroine, Tess, has experienced the worst possible form of a mid-life crisis—desertion by a spouse, the loss of employment, a recurrent disease and the death of a family member. In the midst of these ordeals, Tess begins a gradual transformation from her rigorously scientific mindset developed by two decades working in Toronto’s bio-tech industry to a more spiritual side. Before long she discovers new abilities that she had earlier dismissed as hocus pocus.
Driven at first by her intellectual curiosity, she begins to delve deeper into the esoteric teachings of a Buddhist lama, the secrets of the North American mystic Edgar Cayce and the healing power of Chios energy. Like many confronting for the first time the scientifically unexplainable, Tess battles with balancing her newfound powers and spiritual companions with the fast pace of a demanding new job and her love for her new down-to-earth husband, Stan, who would rather settle for just a quick evening of snuggling and a video.
The precision in Straub’s narrative leaves the reader wondering whether the novel is not an autobiography. If it is autobiographical, Straub has had one of heck of a mid-life crisis. Fact or fiction, the Ordinary Adept is a perfect primer for modern spiritualism, psychism and energy healing. Straub’s eloquent style and sense of humour endear even the most sceptical of readers to the resilient, at times pugnacious, Tess, who struggles with two fundamental questions—“Oh my God, why is this happening to ME and is ANYONE going to believe it?” Oh well, Tess is not the only one asking those questions, is she?
The Ordinary Adept is published by Author House and distributed in Canada by Red Tuque Books. It is also available for on-line ordering from Amazon.com and Barnes and Noble.
Canadian author Phyllis Straub has now left Toronto’s steel and concrete jungle for desert skies and owl-watching in British Columbia’s southern Okanagan.
Con Cú is the author of Soldier, Lily, Peace and Pearls published by Deux Voiliers Publishing.
Posted by Unknown at 19:46