The Lebanese Dishwasher by Sonia Saikaley 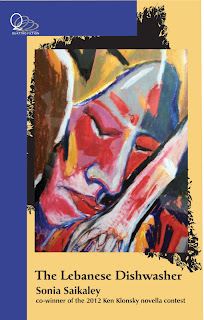 Fellow Ottawa writer Sonia Saikaley has struck gold with her novella The Lebanese Dishwasher. Based on a love story between two Arab immigrants to Canada, her work of fiction transcends the social firewall between heterosexual and gay love to deliver a universal message – love conquers all.

The setting is Montreal in the late 1980s – a city where I also lived during the same time period and knew many in the local Lebanese and Palestinian community. Amir, a dishwasher approaching his thirtieth birthday, flashes back to his adolescence in Beirut in the mid 1970s to mid 1980s. A teenager during most of this period, he is only mildly attentive to the intensifying civil war in Lebanon as he struggles personally with repressing his attraction to other men. Homosexuality for his conservative Christian family is simply unacceptable, and Amir decides to immigrate to Canada. In Montreal, Amir soon finds that his Middle Eastern university diplomas cannot land him a professional job. For five years, he works as a dishwasher in a Lebanese restaurant, and his only connection to the rest of Canadian society is his sexually insatiable English-Canadian girlfriend, Denise.

Salem, a Palestinian cook and co-worker, takes pity on Amir, whose frustration with being unable to get anything better than a dish-washing job is apparent to everyone in the restaurant. Salem believes that Amir has “potential” and offers to introduce him to eligible Arab women. When Salem invites Amir home for supper, Rami, Salem’s nephew, takes an immediate interest in Amir, provoking again Amir’s dilemma with his repressed sexuality. Amir resists Rami’s overtures, but the younger man is persistent. Both try to cover up the true nature of their relationship—Amir with Denise and Rami with his uncle Salem and family, but neither can suppress the growing suspicions around their “friendship.”

The brilliance of Saikaley’s story is that she takes the reader out of the mindset of reading gay literature into a world where love is simply love. This is a story for readers of all sexual orientations. While there is a clear criticism, in Saikaley’s writing, of Arab social attitudes toward homosexuality and toward women, she focuses primarily on developing a story largely devoid of villains. Even the stereotypical Arab macho, Salem, comes off rather sympathetically as he faces his own dilemma of dealing with the relationship between his co-worker Amir and his nephew Rami. Apart from Amir's neighbour in Beirut, Walid, a truly despicable character, the only villain in the story is that of social and cultural prejudice, which drives people to violence when they feel shamed by the “taboo” behaviour of a family member.

The Lebanese Dishwasher is a charming story that keeps the reader’s interest from beginning to end. Saikaley’s story-telling ability, her economy of words, clear and engaging plot and characters with real depth all point to her potential as one of Canada’s most promising new authors. A highly recommended read.

The Lebanese Dishwasher is available through Quattro Books and Amazon and on sale at the Collected Works Bookstore in Ottawa.

Con Cú is the author of Soldier, Lily, Peace and Pearls published by Deux Voiliers Publishing.